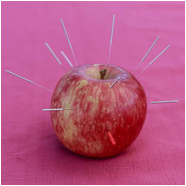 Acupuncture is the oldest continuously practiced medical system in the world and is used by one third of the world’s population as the primary health care system. Because of its noninvasive nature, safety, and effectiveness for a wide variety of health issues, acupuncture is an increasingly popular modality of alternative and complementary health care in the United States.

How does Acupuncture Work?

A. Traditional/Eastern Explanation
A fundamental principle in acupuncture is the balanced movement of “life force” energy or “vital energy” traditionally called “qi” (pronounced “chee”) within the human body. Qi flows through the body via the channels called meridians. Health is maintained when the qi is full and moving properly. Illness may occur when the qi movement is disharmonious or blocked. Acupuncture treatment involves insertion and manipulation of sterile hair-thin stainless steel needles at specific points along the body’s meridian pathways to restore the natural harmony of qi movement. Such an approach to treatment not only addresses the symptoms but also works with the underlying root causes of disease helping the body heal itself.

Acupuncture is also based on other principles:
B. Western Scientific Explanation
A growing corpus of research-based evidence is being accumulated in the West, which aims to find the anatomic and physiologic bases for acupuncture effectiveness.

Currently, a single overarching and unifying Western scientific theory that would comprehensively explain all of the anatomic and physiological mechanisms underlying the observable therapeutic effects of acupuncture on the body has not been formulated. Several hypotheses are presented throughout the scientific literature.

Current Primary Hypotheses on the Mechanisms of Acupuncture

i. Neurotransmitter Release Hypothesis
A vast body of scientific research suggests that acupuncture stimulates nerve fibers in the muscle which send impulses to the spinal cord that activate three neural centers - spinal cord, midbrain, and hypothalamus/pituitary - to release transmitter chemicals such as endorphins and monoamines which block “pain” messages [1].

ii. Opioids and Opioid Receptors Activation Hypothesis
A large number of studies have been carried out to demonstrate that acupuncture inhibits pain via activation of several types of endogenous opioids, which desensitize peripheral nociceptors and depress the neural activities centrally [2,3].

In a 2009 study at the University of Michigan [3], researchers showed direct evidence of short- and long-term effects of acupuncture therapy on μ-opioid receptors (MORs) in chronic pain patients. Acupuncture therapy evoked both short-term and long-term increases in MOR binding potential in a number of brain regions classically implicated in the regulation of pain and stress in humans, including  the cingulated (dorsal and subgenual) regions, insula, caudate, thalamus, and amygdala.

iii. Brain Activity Modulation Hypothesis
Over the past decade, fMRI studies of healthy subjects have shown that acupuncture stimulation evokes deactivation of a limbic-paralimbic-neocortical network, which includes the limbic system. Two major limbic structures, the amygdala and hypothalamus, showed decreased activation during acupuncture stimulation but not during tactile stimulation, which suggests a specific role for these structures in acupuncture action. These limbic structures are central to the regulation and control of emotion, cognition, bio-behavior, endocrine and autonomic nervous functions, and are activated by stress, pain and emotions of negative valence [4].

iv. Connective Tissue Stimulation Hypothesis
Dr. Helen Langevin, Director of the Osher Center for Integrative Medicine at Harvard Medical School and Brigham and Women’s Hospital and Professor of Neurological Sciences at the University of Vermont, has been conducting some exciting research for over a decade that shows what actually happens in tissues when an acupuncture needle is inserted and manipulated.

v. Adenosine Neuromodulator Release Hypothesis
In a 2010 study at the University of Rochester, researchers have found that insertion and manual rotation of acupuncture needles triggered a general increase in the extracellular concentration of purines, including the adenosine. Adenosine is a neuromodulator with anti-nociceptive properties, so it can act as a local analgesic, thus providing a possible cellular and physiological mechanism to explain the pain relief experienced by acupuncture patients [8].